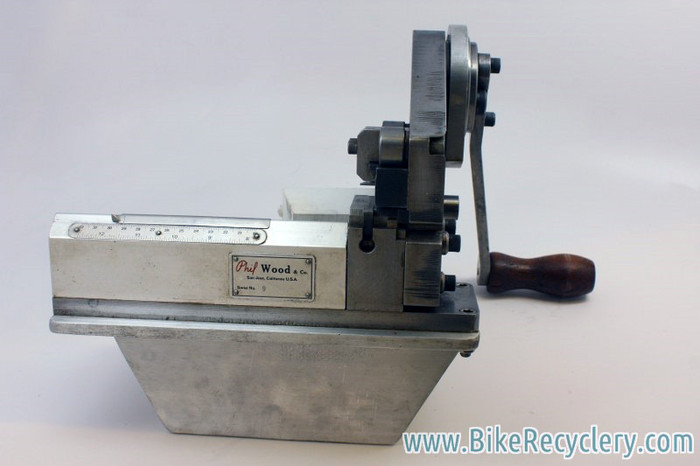 Talk about bicycle history!  This machine has serial number 9, meaning this is the 9th spoke machine the man himself ever made!  Phil made his first machine in 1974, and while there seems too be no information on how many he made a year in the early days it's safe to say this one was probably made in 1974 or 1975.  In these early days machines were individually made, and each machine was unique.  Now, machines are mass produced on machines.  This one was used by a small bike shop in Kansas city throughout the 70's and 80's.  The owner bought it from Phil at Interbike, before Phil even had an official name for these!  It was retired in the late 80's, when the owner moved to California.  The machine was stored in a wooden crate, wrapped in a special grease-covered paper designed to keep machinery lubricated and rust free.

This machine changed the industry.  No longer did shops have to stock every single size of spoke.  If a mechanic wants to build a wheel, all they have to do is roll out a set of the correct spoke length on this machine and build away.  There have been a few other spoke machines made over the years, but the Phil remains the industry standard.

History aside, this is still a fully functional and reliable spoke machine worthy of another tour in a shop. It cuts spokes and rolls threads beautifully (see photos for a shot of a spoke this one cut).  History on the dies is not known.

Included with the machine is a vice plate (MSRP $95), allowing secure use of the machine by clamping this plate into a vice.  You can also remove the 4 bolts/nuts that hold this plate on and mount it directly to your workbench.  Also included is a setup spacer that works for both 1.8mm and 2.0mm spokes.  The machine is still available today, and base wholesale price is $4500.  At our price, you not only get a much lower entry point to having the world's best spoke cutter/threader, but you have a historic talking point that you can brag about to your customers!  Talk about it on your blog, and watch the bike nerds roll into your shop to touch a piece of the legend.

Great used condition.  No rust, or known problems.  Condition of the dies is unknown, but they are fully replaceable if you decide you would rather have sharper ones eventually.  Light cosmetic love throughout.