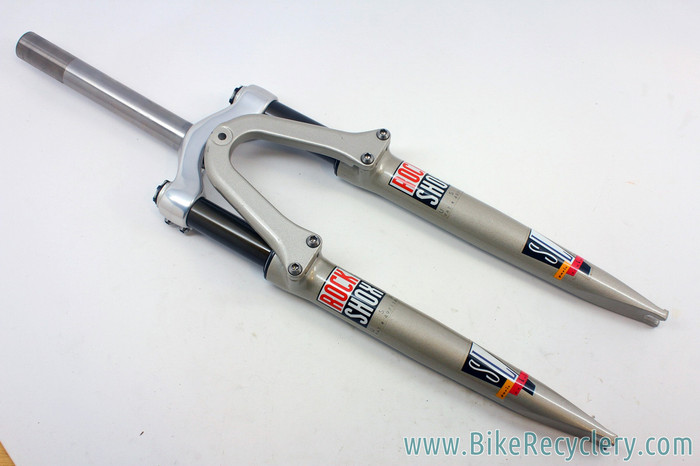 In 1992, 1993, and 1994, French riders (Gilbert Duclos-Lassalle and Andre Tchmil) swept big wins at the Paris Roubaix race, due to this fork!  The 30mm of suspension it provided smoothed out the cobbles enough for a major advantage over rigid forks.  Speculation at the time was this was the next big thing...The nix was put on that idea by a remarkably strong Mapei team who won 5 of the following 6 years.  Ernesto Colnago and builder Ugo DeRosa would not allow their riders to use the Rockshox fork, and the road suspension fork died off.  One of the more prominent photos of this fork are on a lovely blue and yellow Lemond GLx, which is a replica of Gilbert Duclos-Lassalle's winning bike.

The Paris-Roubaix SL was designed on the platform of the Mag21 SL TI.  They swapped in different dampers allowing for 30mm of travel, and included a full lockout!  This is a 1993 or 1994 model which has the damping adjuster knobs at the top of each leg, allowing for 6 different firmness settings all the way to fully locked out.

These forks are quite rare, and almost non-existent in NEW condition like this one! (there is another NOS one on Ebay, where the seller is asking $850!

NEW OLD STOCK! Never mounted, absolutely fully functional.  The paint inside and on the faces of the dropouts is perfect.  Stanchions, decals, and steerer are pristine and mint.  Paint is nearly pristine.  The rear of the right leg has a couple very light marks, as does the top of the brace (see photos).