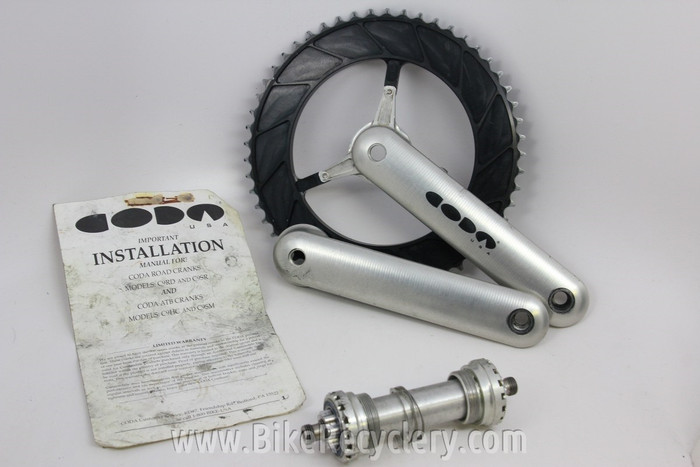 Some of the coolest cranks to come out of the 1990's!  This is the road version with a tri-spoke spider and combined chainring design.  This version is called the C9RD.  There are a good number of mountain versions of this out there.  Rarely does a road crank show up.  But the tri-spoke version is unobtanium.   It even comes with the original instruction sheet!

*These are NOT part of the recall.  Cranks produced during parts of 1997 and 1998 with date codes between 7182 and 8214 had a known issue with the two halves of the arms separating.  These are date code 4101, and well before the recall issues.  The cranks were introduced in 1994 and the date codes are chronological, so best guess this crank was made in 1995 or early 1996.

These were made by a company called "Magic Motorcycle", and for a few years distributed by Cannnondale under the Coda 900 moniker.  They were WAY ahead of their time.  They were released in 1992, when most cranks were still square taper.  This one had a splined, tapered, press fit, oversized external bearing bottom bracket!  And technically, it was "hollowtech"!  The design of the crank itself is very unique, nothing else like it.  Steeped in history and desire.  They sold for about $500 brand new in the early 90's.

The chainrings are machined out of a single piece of aluminum.  The big ring is connected to the small ring.  The three spokes of the spider/arm form a peace sign.

Great to excellent lightly used shape!  Barely a mark on the arms.  The decal is practically perfect.  Chainrings show very little wear.  Bottom bracket bearings are super smooth with no grit.  The cups do have minor tool markings.