Fairly hard to find set of brake levers from the top level Zeus 2000 group!  The brakes and levers for whatever reason had the name 2001 instead of 2000.  They feature a cool two piece QR to remove tires, highly shaped drillium lever blades, and barrel adjusters.  These are distinguished by the similar New Racer levers easily as the New Racer had a radiused vertical logo vs the 2001's rectangle, and the New Racer had a one piece quick release

Excellent used shape.  Original hoods are a touch dry/cracking but are still flexible and have a bit of life left (can be replaced with any hoods made to fit Nuovo/Super Record or Modolo levers).  Lever blades are largely clean, with some road rash in the midsection where they bend outward and one blade tip has a touch of scraping.  Certainly not for nice show bikes, but wonderful for riders. 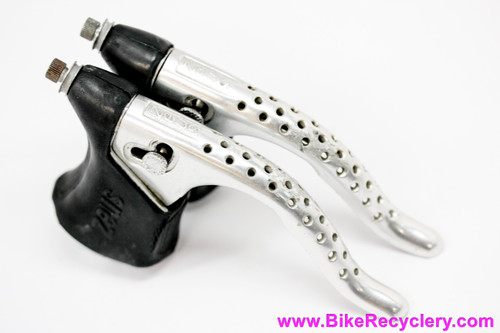