Taranis: God of Bicycles, Storms, and Dry Trail (Eat Your Heart Out Urrl)

Quite a while back, I was trapped in the snowy oppressed valley of Logan Utah (love-hate relationship there for sure).  I was lamenting on the hopelessness of any mountain biking in the near future, when I invented a bike god to cure my ills.  So, naturally I wrote an article about it (this is actually the first story/article I have written since college).  I figured it's about time to do something with it.  Enjoy! 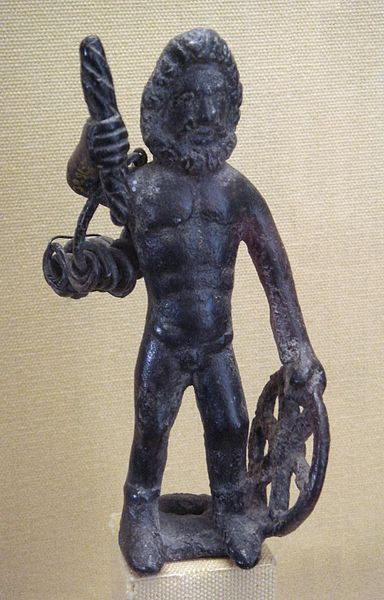 I recently read an article about Ullr, (pronounced EARL) the Ski and Snow God in the Utah Adventure Journal. For those of you not snow inclined Ullr is a Norse snow god, best known as Ye who procures copious amounts of white fluffy stuff from the sky. Skiers and boarders gather by the hordes to worship Ullr and pray for fresh powder. The most popular form of worship is known as “Sacrifice to Ullr”. These sacrifices come in the form of beer poured on the dry dirt, burning old skinny skis, and leaving naked pictures of your wife/girlfriend on the ground (or as of late, the internet!) Ullr is known to be quite promiscuous and loves the ladies! These sacrifices of nudies has likely ended several relationships, or at the very least caused a few beers to be prematurely broken against a wall. So maybe Ullr is just the anti-cupid?

This is all fine and dandy, and a great excuse to party! But there's one massive hole in this story......Ullr is NOT actually a deity of snow! He is only loosely related to skiing, as in traditional Norse mytholigy he is the God of Hunting, Justice, Archery, Dueling, and Shields. His favorite method of hunting happened to be archery, while chasing down his prey on skis. He was known for his prowess on skis, but in no way does historical evidence support him being able to summon snow or influence the weather. In the 60's, the European ski community decided they needed a god to bring them fresh powder, and Ullr was the most logical choice to be glorified. Since then, the public at large put all their faith in Ullr to bring their treasured powder.

There is one problem with leaving sacrifices to bring snow... snow means no dry trails to mountain bike on! So while I sat in my favorite coffee shop buried in by a persistent two feet of snow in the little oppressed valley of Logan Utah last winter, I had a revelation.... We need a Bike God! The skiers and boarders of this world can keep their false god. But we of the fat tire clan need defense against his white arts! I am pleased to introduce a new savior of the spoked influence; Taranis, God of the Bicycle, Lightning and Sun! Traditionally, Taranis is the Celtic God of Thunder, Sun, Sky, and most importantly, the WHEEL! Taranis is a bearded god, typically depicted holding a thunder bolt in one hand, and the other resting on a six or eight spoked wheel. Some say when Taranis spins his wheel, it creates lightning. With his beard, he also looks eerily reminiscent to the late Sheldon Brown! Coincidence? Maybe, maybe not. Sir Sheldon was god-like in his knowledge of the bicycle. Perhaps he's pedaled on to ride with Taranis. For the sake of the trails, we're going to blatantly ignore the fact that Taranis's wheel is actually a chariot wheel.

From this day forth, we shall gather with gather on snowy grounds come March with beer and bike in hand to sacrifice to Taranis! We shall melt the bastard snow with fires and pours of dark beer in hopes that Taranis will bring warm sun to perpetuate the great melt. We shall offer givings of scantily clad mtb'ers on Fat Bikes to provoke Taranis to spin his wheel and create lightning. As we all know, lightning means rain. And rain means it’s too warm to snow! Well, unless it's thunder snow. That's just plain rad and can be tolerated. These will not be pictures, but real live nude riders! Sacrifice requires suffering after all. We've all heard of the World Naked Bike Ride, but how about a snowy naked bike ride? Just be sure to avoid frostbite on all your dangling extremities.

Those in drier climes need not feel left out, as Taranis is known to bring rain to calm the ball-bearing dirt. Similar rituals, just more beer and less fire!

*We, purveyors of the dirt, do not condone the leaving of tire levers on trails as this is against our Leave No Trace codes. We'll continue to believe that the creatures of the forest enjoy the beer, but please take your bottles with you!