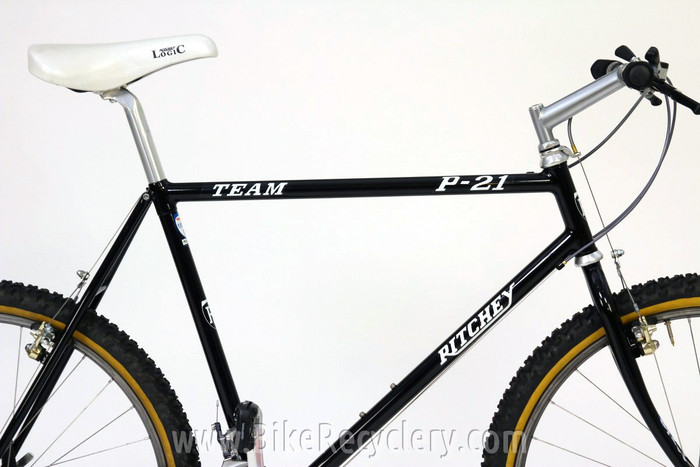 If I had a dollar for every time somebody told me “hang onto this one” after showing this P-21, I would be rich! But luckily for you, I am in the business of bicycle selling, not collecting. This bike is one of very few P-series bikes that were completely fillet brazed by Tom Ritchey himself. That's right, not a single TIG weld on this baby! I acquired this from a long time Colorado bicycle shop owner. The story of the bike is Tom built it for a professional German race team, but they never paid up. So Tom gave the shop owner a call and offered it to him, knowing he had been longing for one. The owner rode and maintained this bike himself. He is one of the best mechanics I've ever encountered, and the bike has been meticulously cared for.

The paint and decals are completely original, and except for some chips on the bottom of the downtube (that were touched up with clear nail polish when they happened) the bike is nearly pristine! It is built to catalog-spec, except for the upgraded XTR M900 derailleurs and Stronglight Delta headset which I couldn't force myself to remove as it looks amazing. The wheels are Tom's original wheels with Ritchey Vantage Pro rims hand-laced to a 600 Tri-color front hub and an XT rear hub.  The shop owner verified the paint and decals are exactly original to how he received it from Tom.

The frame was built between 1991 and 1994.  The serial number is 0P25, but theres no consistency with these numbers.

Near mint, museum condition! At first glance you could believe this bike has never been ridden. A closer (much closer) look reveals the only real area of wear is the bottom of the downtube which has a good amount of paint chips that have been sealed with clear nail polish. Besides that, the paint is near mint. There are a couple very light surface scratches that are not even all the way through the clear coat, and a tiny pinpoint chip at the bottom of the non-drive fork leg. Decals are perfect. Components are all mint without a blemish worth noting. The tires are nearly NOS, and still have parts of the nipples left. Supple with no dryness or cracking. Pedals and chain are NOS. The only part with any wear is the cassette which has the black ano worn off but plenty of life left.  You won't find another nicer example!