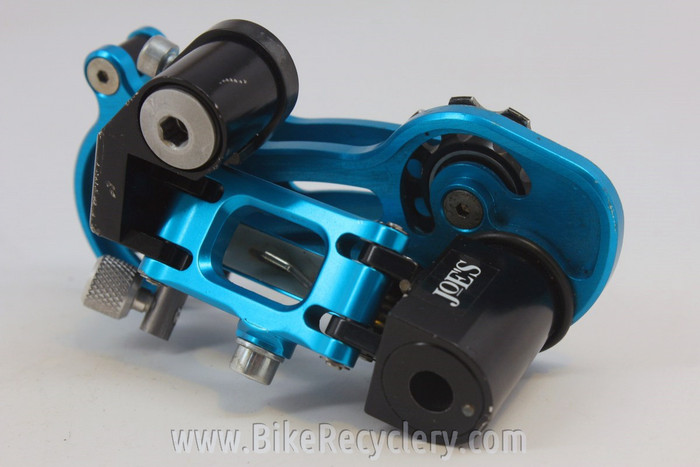 Very clean example of a Joe's RD, sourced directly from the Colorado bike shop that bought out Prototype Machining.  I bought it from them at Veloswap, and this is the last derailleur they had!  They even gave me a small pile of spare parts for the derailleurs with it (ask if you're looking for something)

This is the second version of the Joe's derailleur, released around 1998.  The 1st generation had a much more rounded cage design, among other changes.  Prototype Machining was Joe Glader of Denver's company.  This derailleur is often confused for the Rhino, and they share many design features.  The cages and pulleys are nearly identical.  It is also quite similar to the Paul Powerglide derailleur.

These derailleurs are EXTREMELY rare.  They almost never pop up on the market.  They're much more scarce than the Paul RD, and a bit more than the Rhino. (we also have a silver one for sale, but it's missing the mounting bolt assembly)

Excellent lightly used shape!  The left front edge has some light scraping and there is a light scratch on top of the mounting bolt casing, but otherwise it's very clean with minimal marks.  I was told this one had pretty low miles, and it looks like it.  Original pulleys are super smooth and show minimal wear.  Pivots and springs feel great.  "Joe's" decal looks great.