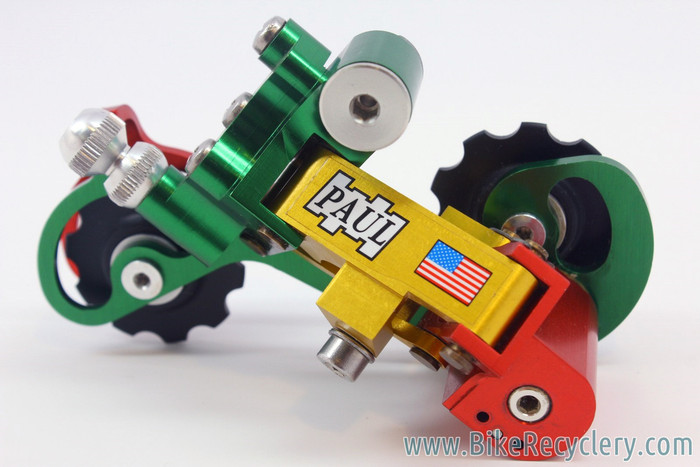 This has to be one of the holy grails of the 1990's ano-CNC aerospace industry mountain bike parts era!  It is truly pristine, and has never touched a bike!  If you have a bike that needs a cleaner rear mech than this one, it's probably already locked in a glass case at the Smithsonian Institute of the Bicycle.

Paul Price of Paul Components in Chico, California released the first version of the iconic Powerglide derailleur in 1995. This version had a flat face plate, with "Paul USA" engraved in it.  The second and final version came out in 1996 (see catalog scans in photos), with the main visual difference being an attractive decal in place of the face engravings.  It proudly flies the American Flag on it's face, which represents the small boutique parts makers of the era perfectly.  The Powerglide sold for about $250, while the XTR RD-M900 sold for only $85.  It was a pure work of art in form, function, and performance.  EVERY single piece of the derailleur was replaceable, down to the bushings.  It was made completely of aluminum, brass, and stainless steel.  A completely rebuildable, smooth shifting, lightweight, and otherworldly attractive derailleur...what more could you ask for?

Shimano had the answer to that.  In late 1996, they released the XTR RD-M950.  It was a dull grey and quite plain looking compared to the Paul.  BUT, it freaking worked!  The shifting performance was five steps above anything else out at the time.  Sure, you couldn't rebuild a single piece of the derailleur.  But then again, it never needed to be rebuilt!  It was a gigantic middle finger to the whimsical and fun parts that ruled the 1990's from the likes of Paul, Ringle, Kooka, and many others.

Absolutely mint new old stock, never ever bolted to a bicycle.  Seriously zero flaws, anywhere.  The decal is perfect, the anodizing is perfect, the jockeys are perfect.  Worthy of any show bike or retro mtb museum in the world.