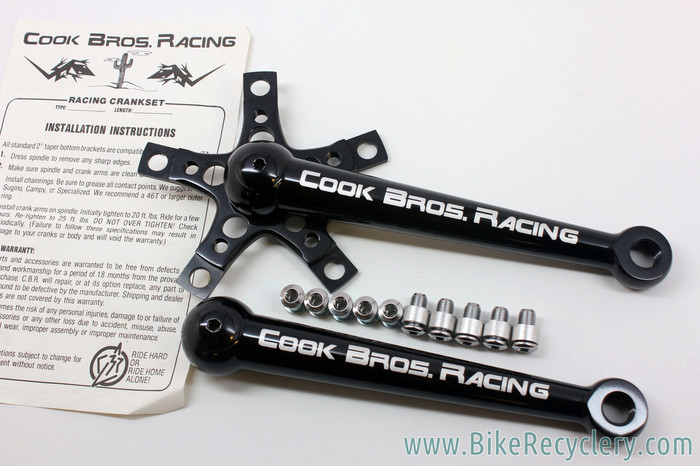 The CBR is Cook Brother's first crankset.  It's the same model that was made in the 80's, and this is a 1992+ model which is when they gave it some major updates.  The most obvious changes are the 92 has a much more spread out and larger font, and the addition of a notch on the back of the drive arm to clear front derailleurs.  Other changes include a modified Q-factor to provide better power transfer, and Cook Bros DSB (Damn Short Bottom bracket) which is marketing lingo meaning you can use BB's as short as 110mm.

In the 1992 lineup, the CBR is aimed at clydesdales, freeriders, jumpers, and abusers who need ultimate strength.  The lightened up RSR is for the svelte XC racers.

This crank (and all the other NOS Cook stuff on my site) was sold to me by the owner of a 1990's mtb shop in South Africa, who has had these sitting on the shelves wrapped in cardboard since Jack Witmer shipped them across the pond.  It includes the chainring bolts Gary supplied with the arms, as well as matching dust caps and an installation sheet.

New old stock, never mounted!  As pristine as they come.  The anodizing and logos look as good as the day they left the factory.  No fading or scratches.  The only odd thing is the outside taper of the drive-side arm shows signs a bolt was installed once (though the same arms pedal threads are pristine showing it was never used).  The original shop owner told me it came from Cook like that (Maybe they did a test mount on all drive arms?)