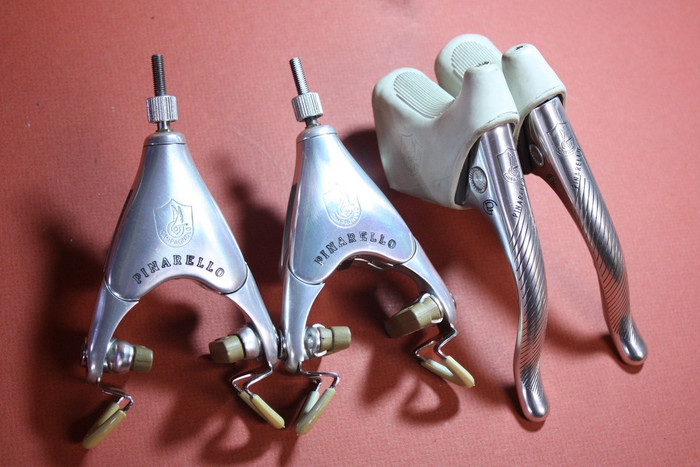 This may very well be the rarest bicycle part in the last 40 years!  According to this article on Campy Only, there are only three of these in existence.  Campagnolo owns one, Richard Sachs owns another, and another guy who has a used set on Ebay for $3000 right appears to be the 3rd.  Well, here is a 4th, in NEW OLD STOCK CONDITION!  You've seen the pics of these online... but have you ever seen a Pinarello pantographed pair?!  Plus, this has the matching prototype/panto brake levers!  These are a true museum piece, and would be at equally at home in the Smithsonian, Bicycle Museum of America, on your show bike, or locked away in a safe as an investment.

This package includes a front brake, rear brake, and a pair of brake levers.  All are pantographed with the Pinarello logo and/or name, and have never been used.  They were mounted on a show bike owned by a now extinct bike shop in Portland, Maine for a short period.

These brakes were never part of a production run.  Campagnolo introduced these and the rest of the prototype C-Record group at the 1984 New York Bike Show.  They were only on display for about an hour, and then pulled from view.  Somehow, a few of these sets snuck out over the years.  The C-Record group was officially released to the public in 1986.  The differences between the prototype 1st generation and the production models are as follows:  These feature the spring clip mechanism that holds the front covers on, an engraved Campy logo on the covers, and the earlier style of cable stop.  This pair is missing the little quick release pieces, but are the correct type to fit them.  (You will need to find a cable stop to mount these correctly on a bike.  We are going to try and find a couple to include, and will update this listing when wwe do)

Condition:  These have NEVER been ridden, and are in pristine condition!  They have been mounted as evident by the light marks on the rear under the mount washer, but the perfect brake pads and lack of any other wear show they haven't been ridden.  The brakes only have a few MICRO scratches.  These are very light, surface level scratches.  They're not easy to find either, they have to catch the light just right.  The rear brake does have one 3mm wide "V" shaped scratch that is visible, near the top/right of the front cover.  Pads appear to have never been squeezed to the rims!  There is one small (1mm x 3mm) discolored spot on the rim contact surface, of unknown origin.  Hardware and inner workings are perfect.  Covers fit very tightly (after some use, these tend to fit looser).  The levers do show a few minor scratches on the blades, near the pantographs.  Blade ends are great.  Hoods are in great shape, and only slightly dirty.  Plenty soft and pliable, with no cracking/holes/tears.  *We took pics on a couple different backgrounds, in hopes of showing the condition of these to the best of our ability*