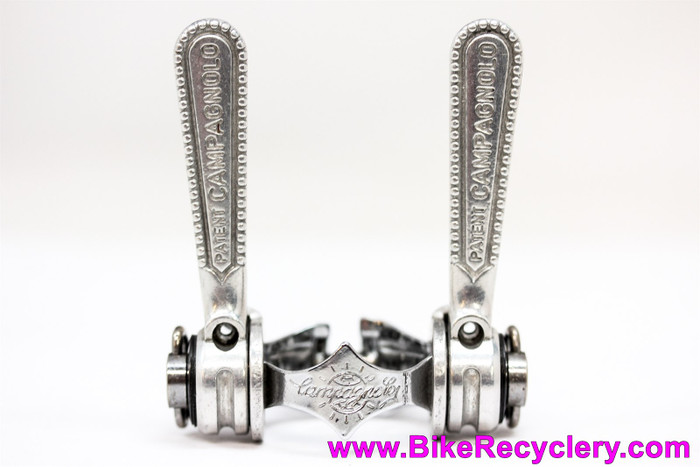 This is a late generation ~1984 to 1987 version of the NR/SR downtube shifters.  They feature the same lever blades and clamps as the late 1970's to 1984 shifters, but have black resin friction plates and wing nuts with the Campy C in a diamond.  Fairly tough to find.

My speculation based on observation is when Campy loosely introduced the C-Record gruppo in 1984, they began making small sneaky modifications to the classic groups to spruce them up.  The last Super Record cranks lacked flutes and had laser etched logos, the last SR seatpost had the upper elbow of the shaft polished.  We have another set of shifters that has stainless steel friction plates and d-ring bolts that are from the same era.

New old stock.  These were installed on a show bike fresh out of the box, but never ridden.  The only signs they've been mounted are the slightest cable marks inside the lever blade's cable slots.  Mint otherwise