The Gran Turismo was Campy's first venture into high capacity touring derailleurs, introduced in 1971.  This had an enormous cog capacity, up to 36t freewheels! It has a quite heavy spring pull, a la the infamous Huret Alvit.  Its cages could be used as weapons, and the red jewel front facing nuts make for quite a beautiful showpiece. Quite a radical departure as far as design from most everything else Campagnolo has made.

There are rumors Schwinn asked Campagnolo to make the GT for their Paramount Touring, Sports Tourer.  That lasted until 1974, when Schwinn started using the Schwinn-badged Shimano Eagle and Campy released the 1st Gen Rally long cage.  These were the dual death notes for the beautiful and dangerous GT RD, yet it lives on in infamy and intrigue.

New old stock, though it was installed on a bike and has a couple around the block rides on it.  The only wear to note is rough spots on the black plastic around the lower pivot, and a de-colored spot and adjacent chrome chip on the inside of the cage plate extending from the upper pulley.  This doesn't even have the scratches typical of chain rub around it, and maybe it's just shop wear.  I acquired this from a collector who had it in their shop for decades.  I cleaned a bit of the dirt off, and if you clean out the deep corners this will be absolutely show bike worthy. 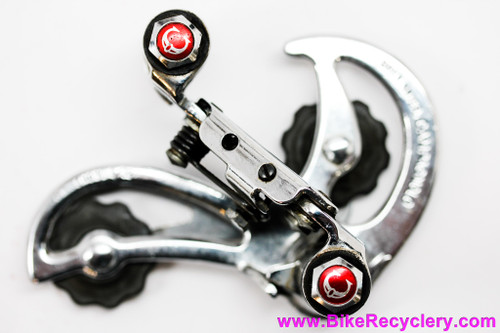