These 3rd gen C-Record (and later, Record) pedals are differentiated from the similar era Croce D'Aune pedals by their black cage plates, and from 2nd gen c-record which had silver cages and dust caps.

This version is often considered a track pedal, but it was also marketed and sold as a road pedal.  A 1980's catalog describes the aero pedals as good for those who are often pedaling on their toes (sprinters) and these square shaped pedals are good for those who pedal with the majority of their weight centered on the balls of their feet.  These pedals are shown in catalog images for the track groups alone, as well as both these and the aero version in the road group images.

New old stock, never mounted.  Just the tiniest bit of shop wear microscratching on the undersides of the bodies.  Front plates are not included (they can be ridden without the front plates if you have toe clips, steal some from a beat up cheap set of these, or make some as they're just simple flat pieces of alloy with 2 holes) 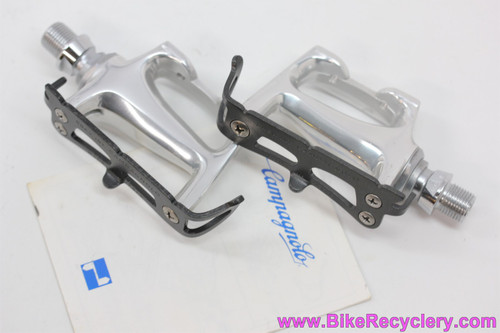