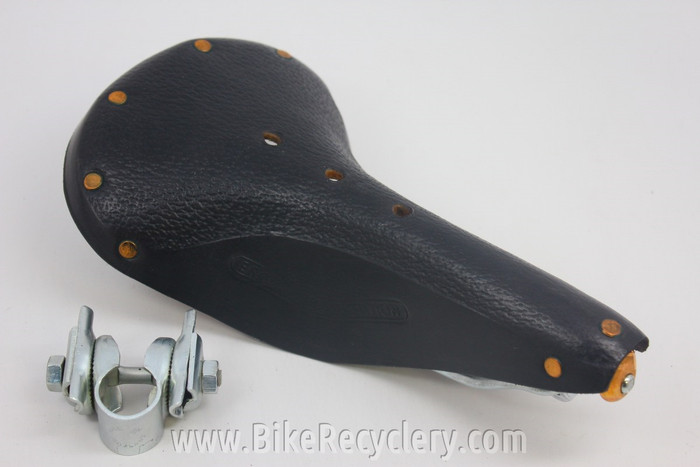 The Brooks Competition was a top level blend of the Brooks B5N and the Brooks Team Professional.  It was made in the late 1970's (this one is dated 1977).  The general shape is similar to the B5N, with the textured top and tall side skirts, but a bit narrower at the nose.  It is more like the Brooks Pro in quality though.  The leather is MUCH thicker than on a B5N, about the same thickness as the thick Pro saddles from the 70's (maybe even thicker).  The side logos are "V" shaped per the Pro model.  The nose is "circumsized", exposing the finely polished brass adjusting bolt (done at the factory).  It did not come with a rear badge, and does not have holes for a badge to rivet to.  It features metal bag loops.

*This is NOT a B17 Competition.  The B17 competition is just a variation on the B17, and this is rather different.

All in all, this is a high quality racing oriented saddle, and is VERY rare!  There's hardly mention of this anywhere on the web, and good luck finding another one for sale (let alone NOS).  It comes with the original Brooks seatpost clamp.

New Old Stock, exceptionally nice!  This one has never been ridden, and is near pristine.  The leather cover is just about perfect, and very supple.  No cracking, dryness, or wear.  The rails do have marks from where the included clamp was installed.  ZERO rust anywhere.  Brass rivets have slight tarnish from age, but could be cleaned up easily.