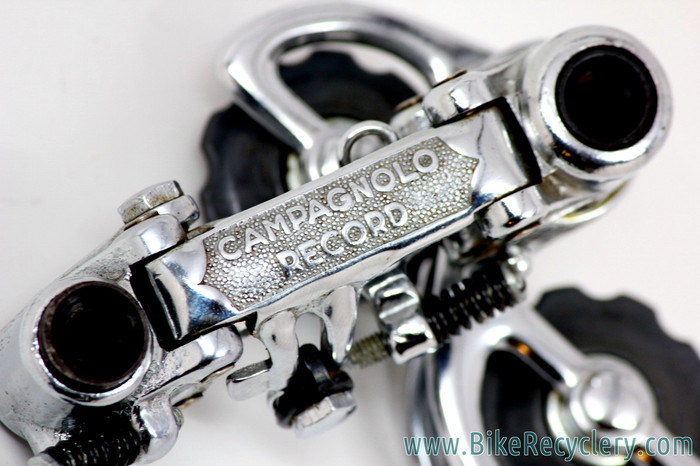 This is one of the nicest unrestored examples of a first generation Campagnolo Record 1020 rear derailleur's we've ever seen!  It belongs on a show bike or in a museum (Perhaps on a very early Colnago, Faliero Masi Special, or 1960's Bianchi road bike?).  This derailleur came from the old stock of a San Francisco bike shop along with a bunch of other untouched 1930's to 1960's parts.

Campagnolo released it's first modern parallelogram derailleur in 1951, the Gran Sport.  In October of 1963, Campy released it's first high end derailleur, the Record 1020 (the one you're currently drooling over!)  It was the beginning of an empire!  It shifted amazingly compared to the Gran Sport and everything before it, and was designed to shift the recently introduced Regina 6-speed freewheel.  It had adjustable, steel bearing, toothless jockey wheels (which was a design way ahead of it's time).  By 1965, Campagnolo changed to plastic jockey wheels.  In 1967, Campy released the first major redesign of this derailleur, coined the "Nuovo Record".  This derailleur would last through the mid 1980's.

New old stock, never installed!  Just the slightest shop wear in spots.   It has hardly a mark, and practically zero dirt.  It's pulleys are unbelievably smooth and quiet.  Springs are very snappy, tight, and smooth.  Zero rust on pivot bolts.  Even the deep corners inside the parallelogram and spring are dirt free.  The slightest spots of dried 60 year old grease around the jockey wheel shim plates and on the pivot housings that could likely be cleaned up with some more elbow grease.  Some super light micro-scratching in spots.  Worthy of any show bike!