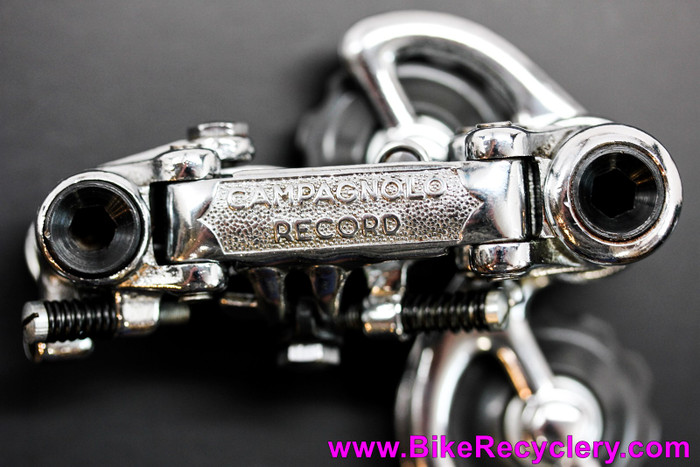 This beauty is a COMPLETELY mint new old stock never installed 1965 to 1966 Record 1020 rear derailleur.  It belongs on a show bike, display case, or in a museum.

Campagnolo released it's first modern parallelogram derailleur in 1951, the Gran Sport.  In October of 1963, Campy released it's first high end derailleur, the Record 1020 (the one you're bidding on and dreaming about!)  It was the beginning of an empire!  It shifted amazingly compared to the Gran Sport and everything before it, and was designed to shift the recently introduced Regina 6-speed freewheel.  It had adjustable, steel bearing, toothless jockey wheels (which was a design way ahead of it's time).  The 13-36 on the back referred to a max capacity of a 13-36t freewheel, but in reality it would only handle a 13-28t.  For 1965 & 1966, Campagnolo changed to plastic jockey wheels with 10 teeth.  In 1967, Campy released the first major redesign of this derailleur, coined the "Nuovo Record".  This derailleur would last through the mid 1980's.

NEW OLD STOCK, NEVER INSTALLED. This derailleur is perfect in every way, without even a spec of dirt to report.  Pulleys are buttery smooth, pivots are pristine, smooth and free of play.  Not a single mark or sign that a tool touched it.  The collector I acquired this from said it was stored in a box from new, and all I had to do was dust it off.