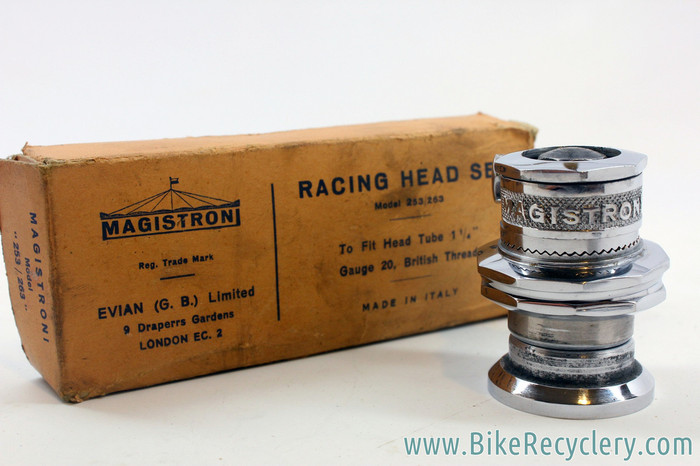 This highly ornate headset seems to be a mix of old and new technologies.  Traditional headclip style headsets that were common on British bikes from the 1930's through 1950's did not have cups that pressed into the head tube or threads, and relied on the clip alone to hold tension.  This one features press-in cups/races as well as threads on the top race.  The little info on the web seems to indicate this can be used as a traditional headset on any frame/fork that has a 1" steerer.

The box states to fit 20 gauge - 1 1/4" head tubes, which roughly translates to the standard for standard 1" threaded.

It appears this was a very high level headset from the very late 1950's to early 1960's.  The detailing and the chrome are the finest quality.  This headset is very rare.

This headset uses loose bearings, which did not come with the headset from the factory (and are not included).  Good chance it uses 1/8" bearings.

New in box, near pristine!  The finish on the cup flanges aren't the same high quality as the rest of the headset, and there's a possibility they were installed (though there are NO signs of use).  Chrome is damn near perfect, just some very light surface micro-scratches.  ZERO rust.  Suitable for even the cleanest of show bikes.