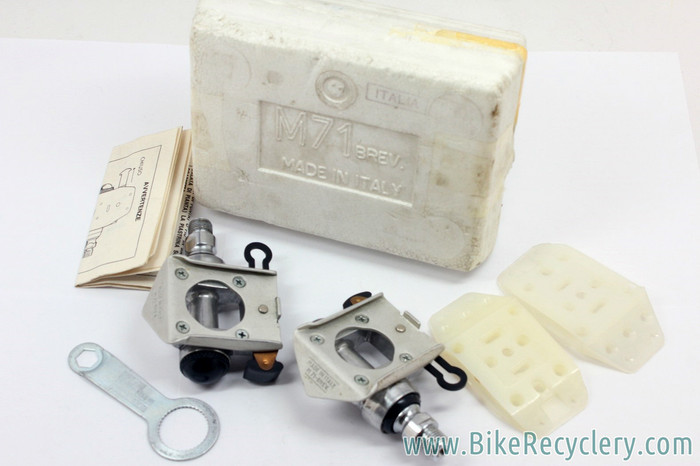 Own a piece of history! These are the world's first truly clipless pedals.  The first gen (with metal cleat) was released in 1970, and the 2nd gen was released the following year. They came in this embossed styrafoam cooler type box, and came with a tool to adjust the bearing tension and remove the dust covers.  These are worth extra points for L'Eroica rides! (okay, maybe not really extra points. But they're for sure L'Eroica approved!)  These are the 4th gen which released in 1974 and ran through the end of production in the late 70's or very early 80's, identified by the plastic dust caps and plastic cleats.

The rider screwed the plastic cleats to the soles of their shoes, and the cleats slit under the rails on the pedal platforms.  To release the their foot, the rider had to reach down and pull the lever at the pedal end. It also served as an auto-release in the case of a rider wrecking, as the pedal lever hitting the ground will release the shoe.

New old stock, in retail box. These came out of the shop of Steve Rex, where they have sat since they were purchased from a distributor.  Manual, tool, and cleats included. Pedals are mint. Bearings are buttery smooth, with no dry sound/feeling, but they're a bit on the tight side. These might break in with use to be easy to spin, or you can adjust the tension.  Box is in excellent shape with no damage, the tape shown on it was to keep the two halves of the box closed while in storage.