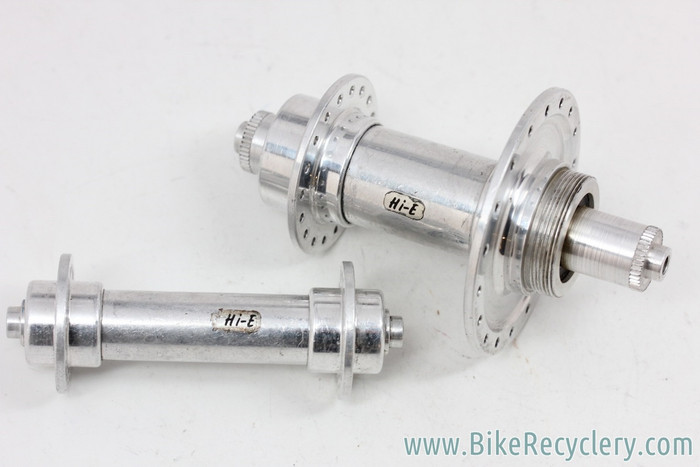 Hi-E hubs were produced out of Tennessee from about 1972 into the early 1980's.  The rear high-low version was made from about 72' to 77'.  They were an engineering marvel at their time, featuring smooth sealed cartridge bearings and styling that would be more at home in the 1990's aerospace CNC anodized era.  They were right there with Weyless hubs stylistically for the era.

Charlie Cunningham, Steve Potts, Ibis, etc worked with these hubs a lot in the 70's and early 80's.  These hubs have a Hi-E decal on the center shell, possibly indicating that these are earlier models (the later ones had engraved logos)

Near mint very lightly used shape!  Bearings are super smooth with no grit or drag!  The flanges and hub shells are free of damage or real scratches, but have microscratches (especially the center shells).  These would probably polish up really nice.  Almost no spoke hole wear.  Good enough for all but the best show bikes, or polish them to go on any show bike