(You save )
Write a Review

This beautiful lugged steel bicycle frame was handmade by Dave Moulton.  It is one of less than 3000 "Fuso" bikes ever made, and was hand built to order*The tubing is Columbus SL, one of the most prestigious frame materials througout the 1970's, 1980's, and 1990's.  It's painted a very cool metallic purple, with Dave's famous logos.  It's frame number is 1822, indicating a 1989 build date via Dave Moulton's Frame Registration Page.

The frame is built with the legendary Columbus SL steel tubing.  The tubes are put together with Columbus lugs and dropouts, a Cinelli fork crown and brake bridge, and Campagnolo downtube lever bosses.  Geometry is a traditional racing geometry, with a non-sloping top tube and 74 degree head tube angle.  This represents the best materials available, and results in a wonderous ride quality.  The first thing you will notice when you spin the pedals is how stiff and responsive the frame is.  This model feels quicker than my 2007 Independent Fabrication Crown Jewel with Reynolds 853 ($3000 frame).  You will then notice it's cornering ability, which is on par with my IF and the Pinarello Montello sitting in the shop.  It steers quick, but far from being twitchy.  Very predictable handling.  Of course being built from SL, the bumps disappear underneath you.  Super smooth ride, worthy of many century rides.  The indexed shifting is quick and precise.  Brakes will stop you on a dime.

Dave Moulton began building bicycles in England in the early 1970's.  He moved to the U.S. in 1979 to build bikes for the U.S. Olympic team under Paris Sports, and shortly after began building bikes for Masi.  He formed his own bike building business in 1983, and produced frames under the names Dave Moulton, Fuso, John Howard, and Rechereche.  Fuso bikes were made between 1984 and 1993 in Temecula and San Marcos California.  The word "Fuso" means molten, in Italian.  The name struck Moulton, as it was a play on words on his last name.  The gorgeous headbadge on this bike is his logo, an artistic rendition of molten metal being poured into a cauldron.

Great overall condition.  It does have one tiny (2mm x 2mm) dent in the upper drive-side seat stay.  It is not very deep, and causes NO structural or safety issues.  The paint is very glossy, and the decals look amazing with barely a mark.  There are a few light scratches on the drive side of the downtube, near the head tube.  A few other marks elsewhere, but you really have to go looking for them.  Overall great shape with light wear from normal use. 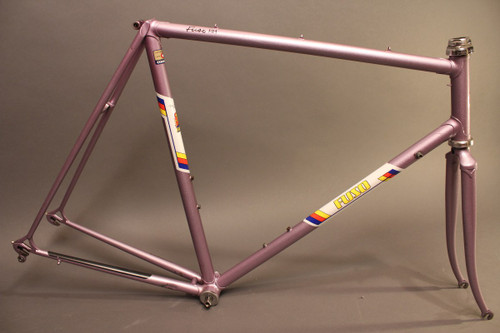