Produced from 1971 to 1985, the Record Superleggeri (SL) pedals were between Nuovo Record and Super Record on the hierarchy.   The N/R pedals had silver steel cages.  The SL pedals had the lighter black anodized cages, but still the durable steel spindle.  The Super Record pedals added titanium spindles, which were prone to breaking.  These are often passed off for SR pedals.  Don't be fooled, they're not Super Record unless a magnet won't stick to the spindle!  This is the pista version, which differs mainly by the lack of the "wing tips" above the end of the pedals.  This allows for sharp turning without grinding the pedals on the ground.

These are in mixed condition, with great mechanics and some cosmetic issues.  The good: The bodies and cages are near mint with the exception of a bit of tip scrapes.  The bearings are buttery smooth and well adjusted.  The bad: The spindles have rust, and the dust caps have a big section of chrome scraped off each.  Surely not for show bikes, but plenty good to ride. 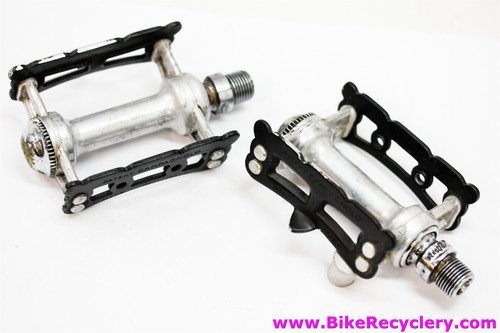