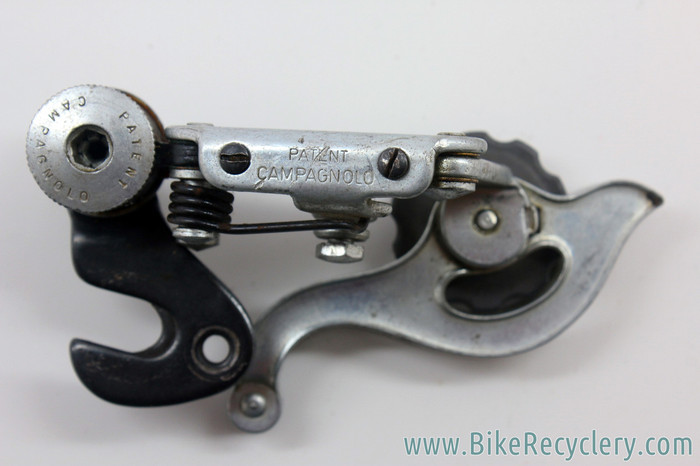 This uber obscure piece of Campagnolo history features the single jockey wheel covered by a curvy cage, combined with the odd parallel cage plates from the (later) Campagnolo Valentino Extra.  The single pulley design was a reaction to racers worrying that the extra friction from a chain wrapping two pulleys would slow them down.  The jockey wheel (which appears original) is a 10t unmarked pulley.  This may not be the highest performing of derailleurs, but it's one of the more rare and unknown Campy models.   It appears in the 1968 catalog.

It's earliest rendition was the Nuovo Sport #2230 that appeared in the 1963 catalog, which had a similar basic profile but was less refined in appearance, and may have had the spring connected to the pulley side instead of the mount bolt side.

Excellent or better lightly used condition.  Pivots and spring feel excellent with no play, jockey spins buttery smooth. Minimal cosmetic marks, has just a bit of dirt and dried grease in the corners that could be cleaned further.