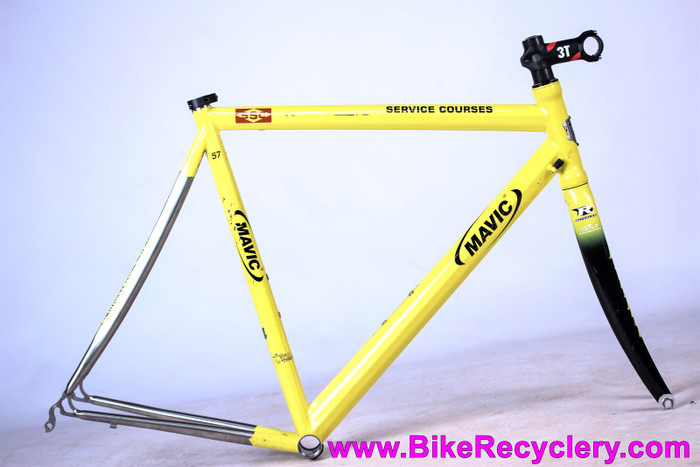 The bold beauty you're viewing is a stock 57cm Litespeed Vortex road frame/fork that was painted yellow by Mavic to be used as a Neutral Support Bike.  The paint would be very easy to remove if you don't like it, leaving you with the same raw titanium finish the normal Vortex.  Litespeed gave most pro racers off the shelf stock Vortex frames, because they couldn't make them any better if they tried (Source).  The 6AL/4V ti tubes are highly shaped and multi-sided, featuring a 10-sided seat tube, a diamond-shaped top tube, and teardrop-shaped chainstays.  The stock frames are known for their extreme stiffness and power transfer capabilities while being feather-light, and claim multiple Tour De France stage victories and Ironman competition wins (Source, 2004 Litespeed catalog).  Build it up to ride, or hang it on the wall and share the history with your guests!

This frame was a neutral support bike in the 2004 Pro Peloton in races such as the Tour De France, Paris-Roubaix, Giro D' Italia, Giro Rosa, Tour of Flanders, Tour of Colorado, and countless others.  The Mavic Neutral Support Car is part of the caravan of cars that follow behind the pro racers, and it would give support to any racer from any team who needed mechanical support.  They had extra bikes like this one to hand out in case of broken bikes, and each was clearly labeled with the size on the side for quickness.  There is no way of knowing what riders actually rode this particular frame, but in 2004 racers such as Fabian Cancellera, Thomas Voeckler, Robbie McEwan, Tom Boonen, Ivan Basso, Lance Armstrong, George Hincapie, Jens Voigt, & Jan Ullrich were all in attendance that year and could have ridden this frame if they ride close to a 57!

Below is what the collector who sold me this frame has to say about it's history:

"Mavic provides all the neutral support bikes for the professional cycling tours. In 2004, Mavic was partnered with Litespeed to provide the bikes - hence the paint job. I bought that bike in Oct 2004 from Contes Bike Shop in VA beach. They had purchased around 10 bikes at the end of the racing season and I was lucky enough to get one. Technically, I bought the bike used, but I am original owner after Mavic."

The frame and fork have zero damage, dents, cracks, bends, etc.  If you stripped the paint from the frame and gave it a quick buffing, it would be essentially pristine.  The frame's paint itself was done with the goal of looking good for one season of support, and thus has chips from where it contacted the support car's racks as well as other spots.  The paint is a piece of history, and it shows the battle scars from the caravan transport and racing.  The fork, chainstay decals, and headtube badge which were all spec'd as stock from Litespeed are in near mint condition with only a few light marks here and there on the fork.