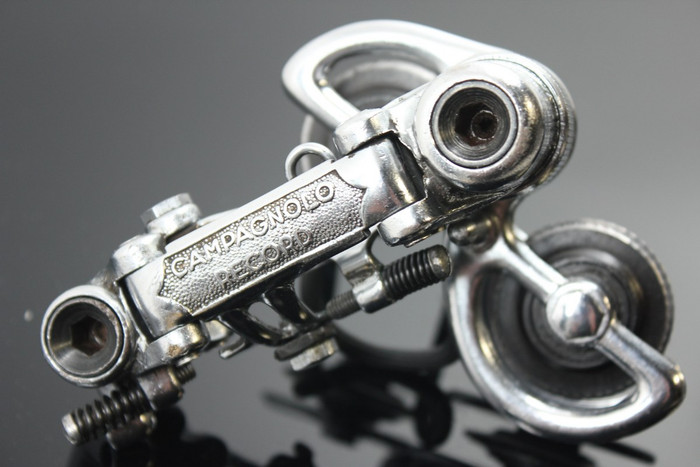 This is one of the nicest unrestored examples of a first year (1963) Campagnolo Record 1020 rear derailleur's we've ever seen!  It belongs on a show bike or in a museum (Perhaps on a very early Colnago, Faliero Masi Special, or 1960's Bianchi road bike?).  This derailleur has been completely disassembled, cleaned, inspected, and greased.  It has hardly a mark, and practically zero dirt.  It's bearings are unbelievably smooth and quiet.  Springs are very snappy, tight, and smooth.  This particular derailleur is identified as a 1963 or 1964 model by it's steel bearing, toothless jockey wheels.  It can be speculated that it's a 1963 (and possibly a particularly early production) model, because of the crispness of the lettering on the face.  This must have been made when the casts used to make the face imprints were fresh and hadn't worn yet.  You can tell on some later models that the letters have some fuzziness around the edges.

Campagnolo released it's first modern parallelogram derailleur in 1951, the Gran Sport.  In October of 1963, Campy released it's first high end derailleur, the Record 1020 (the one you're bidding on and dreaming about!)  It was the beginning of an empire!  It shifted amazingly compared to the Gran Sport and everything before it, and was designed to shift the recently introduced Regina 6-speed freewheel.  It had adjustable, steel bearing, toothless jockey wheels (which was a design way ahead of it's time).  By 1965, Campagnolo changed to plastic jockey wheels with 9 teeth, and eventually to an 11 tooth version.  In 1967, Campy released the first major redesign of this derailleur, coined the "Nuovo Record".  This derailleur would last through the mid 1980's.

Near MINT to MINT lightly used shape!  This thing is beautiful, a true show piece.  I completely disassembled it, thoroughly cleaned and greased, and reassembled the derailleur.  The springs are tight and smooth as the day it left the factory.  Zero play in the body/springs.  The pulleys are smoother and quieter than we have ever seen from these toothless jockey wheels.  They're just as smooth as many modern sealed bearing derailleurs, with none of that dry metallic sound that these are infamous for.  Pulleys are adjusted correctly with zero play or tightness.  All bolts are in excellent shape, with no chrome damage or rounding.  Limit screws and springs are free of dirt and corrosion, and in excellent shape.

A full inspection revealed only two very minor blemishes to note.  1) The INSIDE of the bolt hole on the tension bolt has just a bit of VERY light rust.  With a bit more work that should come out (or, replace it.  The bolts were not changed from 1963-1966).  2) the lower left knuckle has a spot where the steel plating has worn off and the bronze is barely showing through. This is about 2mm wide by 1mm high, and barely noticeable.  Not very deep.