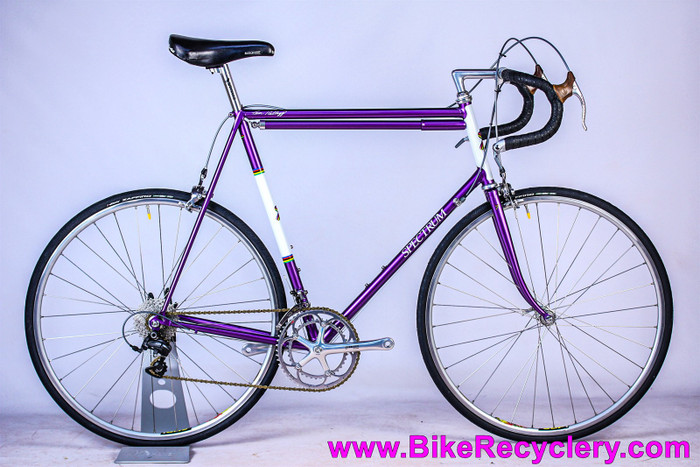 ** Portland local pickup special is $2700**
Feast your eyes on this classically designed, custom built Ishiwata / Columbus SL out of Tom Kellogg's Spectrum Cycles workshop in Pennsylvania. This bicycle is unreasonably pretty.  It was given a $1300 paint job by Joe Bell just four weeks ago and not ridden since.  The previous owner is an avid lifelong cyclist, and he built this up with a frankenbike-style collection of parts chosen with a performance first and "correctness" 2nd attitude.  It's modern meets vintage styling is well suited to this frame that is styled as if it could have been built in the 1970's but wasn't even conceived until 1991.  It was originally intended to be his dream bike fulfilled, but he found his dream gravel bike and sold this Spectrum and some other bicycle gold to me to fund it.
This frame currently has 700x25's with lots of room.  The front will easily fit a 28 or maybe even a 30mm.  The rear should fit most 28s fine, but the tallest of tires might come pretty close to the brake bridge.  It features internal cable routing, 130mm rear spacing, finely filed crafted from scrach lugs, and a cast fork crown that at first glance resembles a segmented fork.
Kellogg is one of the most important framebuilders in USA history, and has been involved in the creation of top shelf boundary pushing bicycles since 1976 when he built his first frame out of a barn.  He has designed, fitted, and painted frames under his own name, the Ross Bicycles "Signature" line, and as of 1988, Spectrum Cycles.  He helped form Merlin Metal Works and was instrumental in testing the now legendary ExtraLight.  He's considered a very top tier frame fitter.  As of recent years, Tom did the fitting, designing, and painting of Spectrum frames while his business partner Jeff Duser did the frame building and from-scratch creation of the lugs.  Tom & Jeff announced their retirement last year, and there will be no more Spectrum Cycles frames ever built.  I've only scratched the surface of Tom's bicycle resume.  If you crave even more history, here you go!
I emailed Tom Kellogg himself, and he quickly replied with these paragraphs and data points:
"Boy, Joe did a beautiful job on that frame.  No surprise there.  We sent him the decal set for it a while ago.  He really is the best.
OK, here's the deal on that bike.  First a few general things, then onto specifics.
Materials
Geometry

This bicycle is for all intensive purposes as brand new as you can get save a few used parts.  The frame was restored by Joe Bell in June of 2020 and built up shortly after, and has zero miles since.  Paint and frame are ABSOLUTELY pristine.  I searched it over in my photo studio lighting and found literally zero marks.  Not even a touch of cable rub, as the previous owner had a towel between the cables and the frame.  As it was restored by Joe bell, you can be assured this frame is arrow straight and dent/damage/rust/blemish free.  The vast majority of the parts used to build it are brand new with zero miles, along with a handful with under 200 miles and only one actually "used" part.