Your chance to own a radical and affordable piece of mountain bike history!  This was the world's first production monocoque carbon mountain bike frame, debuted in 1989.  It used technology designed for the Brent Tremble designed 1987 Kestrel 4000 Superbike roadie, and the geometry was designed by Keith Bontrager.  The frame was molded with a blend of carbon fiber and fiberglass, which is added to increase impact resistance.  Further, steel reinforcements were built into the seat tube, headtube, BB shell, and dropouts. This general monocoque design and general frame shape was an influential force, seen in later bikes such as the Colnago C35 (which lacked a seat tube!), Trek OLCV, Lotus Sport MTB, and others.

The original owner told me it is a 1989 model. It was restored years ago by CyclArt, and it shows a few battle scars since, and you can see what looks like the original grey graphite finish (why wouldn't this have been stripped before repainting? I don't know).  Would make a lovely show bike, wall hanger, or piece of a bicycle art sculpture.

This frame comes with what could be the original direct-mount Shimano Mountain LX front derailleur, and the original Tange Prestige fork.

The frame appears sound, but I am selling this "as-is" with no returns.  I don't have an x-ray machine to check the frame for damage, and I am going to recommend not riding this frame unless you have it checked out by a carbon repair shop.  The  paint wear spots are large enough to be reasonably concerned on an early carbon frame.  I do not see any cracks or for sure carbon damage though.

Aesthetically, it has a number of chips, scratches, and scuffs.  The paint is not faded, and with it's mottled gradient theme these previously mentioned marks blend in quite well (well, some of them do).  it's not perfect, but it's a perfect patina for a rider museum piece for display. 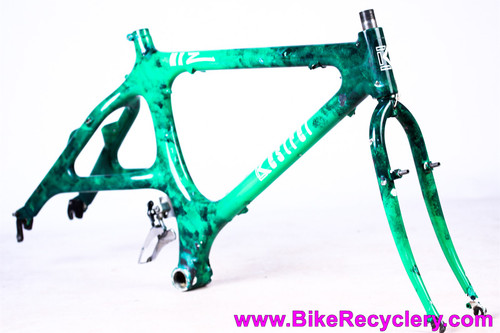