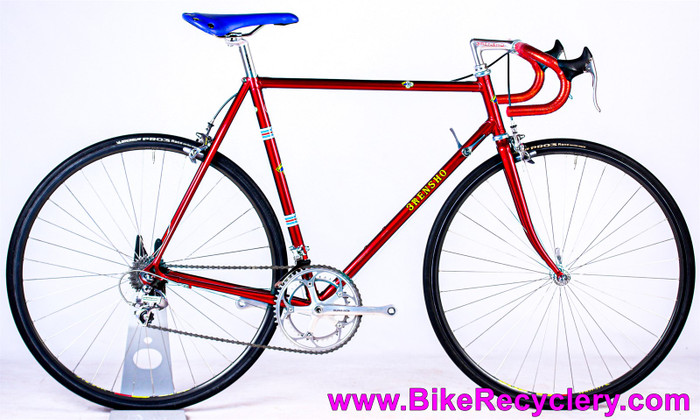 Almost pristine late 1980's to early 1990's custom build for the Japanese market loosely based on the Super Record Aero model with some features from the Katana. The "C" in the frame number marks this frame as a Japanese model & custom built.  SuperEnd dropouts, aero semi-fastback seatstays, and plate type chainstay bridge are from the Aero while the unicrown fork is closer related to the Katana.  Andrew Muzi of Yellow Jersey confirmed this information, and added that this is most certainly a 1987 due to the Super Ends being introduced in 87' and the built in BB cable guides this one has were faded out after only a handful Super End bikes, being replaced by bolt on resin guides. He says this was likely one of the very first Super End bikes, and also confirmed that it was personally painted with his friend Jim Cunningham of CyclArt.

The build is Full Dura Ace 7400/7402/7410 including a panto Dura Ace stem. The wheels are Dura Ace 7400/7402 hubs radial laced (except 2-cross driveside on rear) to high level Mavic Open SUP CD Ceramic rims.  The gem tones based color scheme is pleasingly matchy.  Bar tape nearly matches the paint, as does the red of the panto stem, and painted skewer logos, & red rim decal.  Blue saddle is an exact match for the dark blue in the 3Rensho logos, and the Mavic yellow rim decals & painted rear brake engraved logo are almost an exact match to the frame logos.  This is one special & unique bike that is sure to draw envious stares and questions.

This frame was restored by CyclArt, and is higher quality than the original paint/decals!  The paint is a luscious candy crimson red over metallic, likely over a chrome or silver base.  The paint has such depth and shine, it almost glows!  The pics don't do the quality of the paint justice. Decals are debossed and under the paint.  The chainstay, TT near seat cluster, and fork blade decals were left off for a sleeker look.

If you've read this far, you're probably familiar with the cult of 3Rensho (pronounced 'San Rensho') which stands for three victories.  The three victories refers to a rare accomplishment by a Japanese Keirin racer claiming a win on three consecutive days of racing (qualifiers, semi-finals, and finals).  3Rensho and Cyclone were companies created by Yoshi Konno, just after Yoshi and his brother Hitoshi founded Cherubim Cycles in 1973.  Konno had several builders/apprentices, including the legendary Yamaguchi and Masahiko Makino.  All of these names represent Japan's finest master framebuilders, and are considered the equals of Italian greats like Cino Cinelli and Ugo De Rosa.

Almost completely pristine fully restored show bike condition!  Not a single scratch/chip/dent/bend on the frame worth mentioning!  The only mark whatsoever I see is a couple tiny black marks on the seat tube just above the BB shell.  All parts are NOS or just barely ridden.  The parts of the seatpost showing in the photos are mint, but there are insertion marks on the part within the seat tube.  Derailleurs, shifters, hubs, stem, bars, saddle are mint and were likely NOS before being installed.  Rims appear unridden or almost unridden, though there's slight wear to the decals in spots.  Brakes and levers are very close to mint and look almost unridden, though there are a couple stray micro-scratches.  The crankset looks very close to pristine and barely ridden with the exception of light to moderate scrapes on the arm ends.  No heel rub.  All in all, aside from the crank arm ends this passes for completely NOS.  It's likely among the cleanest and most spectacular 3Rensho bikes around.