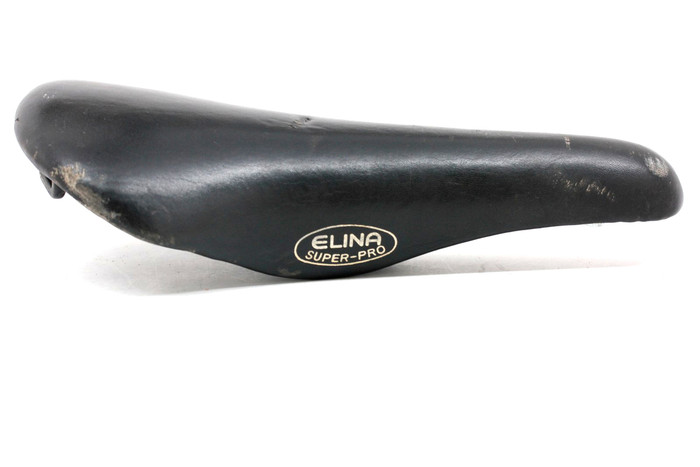 The Elina Super Pro saddles were released in 1976 or 1977, and were immensely popular in the OG old skool BMX scene of the 1970's and early 1980's.  They also found uses in the road and track worlds, on high end bikes like the Centurion Semi-Pro and Professional. They were molded by Matex, and manufactured in Japan.  They were akin to the Cinelli / Unica Nitor saddles, and were among the very first "modern" cover-over-plastic saddles made.  It features an adjustable nose piece such as leather hammock saddles did (Brooks, Ideale...)

This one is dated February 1977, making it a very early first generation example.  Some of the Super Pro models were released without a cover.  If that is what you seek, just remove the cover and you'll likely have a pristine plastic saddle.

Excellent OG survivor condition.  The faux leather cover is supple and free of tears and cuts.  It does have some finish scuffs. It's in wonderful shape for an all original survivor period BMX bike, though it would be out of place on a minty restored bicycle.  There is likely a pristine plastic saddle underneath the nylon cover!  Decals, rails and frame are mint.