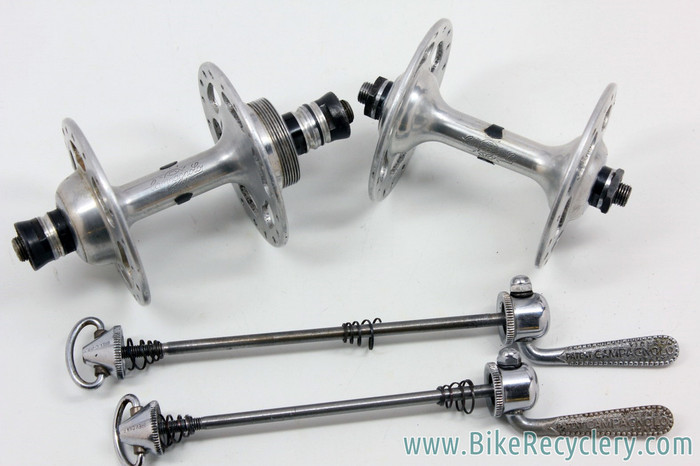 This is a 1959 stamped first generation Record hubset! According to the history literature, these were produced from 1960 to 1963.  It's possible they used parts produced in 1959 to make these hubs released in 1960, and it's possible this was an early release or prototype from 1959.  The skewers are the original "open-C" flat blade skewers, and the hub shell has only the Campy "World" logo.  The word "Record" was added to the hub shell in 1963/1964.

The No-Record hubs seem to be more commonly found with the 1964 and later closed C skewers.  The original Open C skewers are quite rare.

High flange NR/SR hubs are the gold standard for classic road bicycle restorations from the 1960's to late 1980's.  They are drop dead gorgeous, last forever, spin like butter, and add another level of prestige to your bike!  The Record level hubs have replaceable cups and nicer axles/cones than the similar but inferior Gran Sport and Tipo hub.

The rear spacing is oddly 128mm. I don't have an explanation for that.

Excellent to near mint used condition.  Bearings are buttery smooth and well adjusted, with fresh grease.  Skewers are clean overall but have a little bit of aged patina.  They look their age, but they don't look beat up. Oil port clips look excellent.  Both have a lovely original polish, that could be improved with a little polishing compound if desired.  Spoke wear is quite light.  Some micro-scratching on the shell.  Overall they look nicer than they appear in the photos!  Appropriate for a show bike as long as it's not a pristine restored show bike.