This is a very rare #626 downtube mounted cable guide from the 1950's to very early 1960's.  This generation features the distinctive round tube as the guide, instead of the upside-down "V" shaped guide the common 60's to 1980's ones have.  If you're restoring a 1950's Bianchi or other Gran Sport equipped Italian bicycle of the era, you probably already know what this is.

Very close to immaculate condition!  It looks like it was installed just once, and has seen few or zero miles.  Clamp is round and even.  Show bike worthy with just enough patina to look like it's been around 70+ years.  ZERO rust, scrapes, road rash, or other damage.  The chrome is clear and has the usual tiny beginnings of pitting for hardware of this age.  The clamp bolt's head face is pristine and shiny.  A touch of wrench marks on bolt and nut.  You won't find cleaner unless it's NIB. 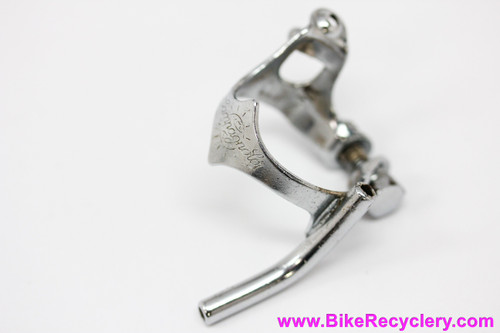